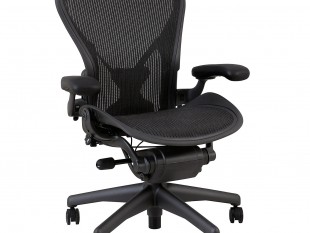 Herman Miller chairs are well known for their modern and innovative designs with fantastic ergonomics, bringing endless comfort to everyday work life. Its selection of chairs adapt to the user's posture and offers support based on their sitting position. This fantastic range of chairs can be delivered assembled and ready to use.

The award-winning Herman Miller started back in 1905 and was then called the Michigan Star Furniture Company.It was later bought by Herman Miller in 1923 for his son who had been working there since 1909 who later went on to name it after his father. By halfway through the 20th century the company had become renowned for its modern designs after working with iconic designers such as George Nelson and Ray Eames.

Since then Herman Miller has become a recognised innovator for contemporary interior furnishings, solutions for healthcare environments and related technologies. It has manufacturing facilities worldwide as well as sales offices, dealers and customers in over 100 countries.

The award-winning firm focuses on creating a chair that has the ergonomics and comfort to supply the optimum in comfort no matter what the user's seating requirements. In 2016 Herman Miller won the Gold iF Design Award which recognises achievements in design around the world, proving the company's success in the seating industry. Check out their range below today.

Herman Miller Mirra 2 - This chair has the perfect ergonomics to supply ultimate comfort whilst working. It is at one with the body by supporting every movement.

Herman Miller Aeron - This chair has everything required from office seating. Adjustable at every joint, the highly engineered weave stretches to offer crucial support where needed.

If you would like to chat with one of our experienced team members about finding the perfect Herman Miller Chairs for you, please contact us on 01892 510202.